The entire series will be completed and return soon! Stay tuned! 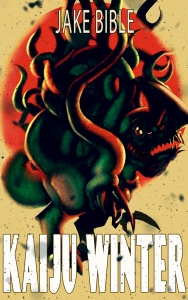 The Yellowstone super volcano has begun to erupt, sending North America into chaos and the rest of the world into panic. People are dangerous and desperate to escape the oncoming mega-eruption, knowing it will plunge the continent, and the world, into a perpetual ashen winter. But no matter how ready humanity is, nothing can prepare them for what comes out of the ash: Kaiju!

The Yellowstone supervolcano has erupted and out of the massive chasm of its smoldering caldera came the kaiju- giant monsters bent on destroying everything in sight! Federal Marshal Lu Morgan and her ragtag group of survivors and government agents fought hard to stay alive and defeat the massive monsters, but now a second eruption has sent things even more deadly flying up into the ash cloud that covers the land.
The US government, the survivors of the eruption, and a team of scientists must fight a new evil that falls from the sky and turns animals, and people, into grotesque creatures bent on killing every living thing in their path. It is a race against time, and a race for survival, as all involved struggle to find answers as to where the monsters came from and how to stop them.
If stopping them is even possible!

North America has been decimated.
The rest of the world is not far behind as volcano after volcano erupts, spewing not just magma and hot ash, but monsters of impossible size out onto the battered and broken surface. These monsters are hellbent on getting to North America to do battle with the behemoth that has broken free of the Yellowstone supervolcano. A battle that could tear the Earth apart.
It is now up to Adrianna VanderVoort, an unknown entity that has been given control of all human interests on the planet, to figure out how to keep the world from complete destruction. With her network of scientists stationed in facilities across the globe, VanderVoort races to understand the Substance that bore the creatures and how it can be subverted for her purposes or finally destroyed.
If it can be destroyed.
Humanity’s struggle to live continues as the world’s few survivors are forced to face complete annihilation at the hands of a Kaiju Inferno!

Soon to be completed!