While you read this, I’ll be on I-40 bringing the boy back from college for spring break.

You know what makes spring break even better? A new audiobook!

Click this gorgeous pic and go get you some Galactic Vice! 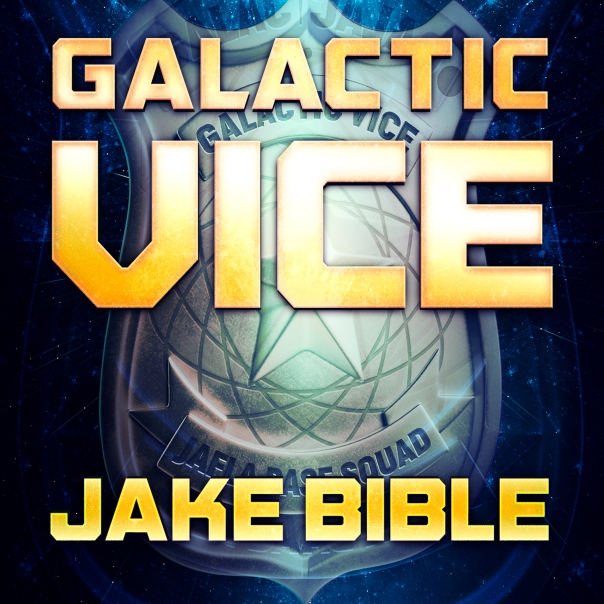 Never Be Forgotten
By
Jake Bible

No one could have seen it coming. No one.

Even the megacorporations had no idea it was the end. They were oblivious to the crisis right on the horizon. Always busy with current Profit & Loss statements, never thinking of the future or the consequences of their actions.

When the stores began to run out, people brushed it off. No one even considered it a possibility. The end? Never. Can’t happen.

But it did happen. And when it was finally all gone, civilization collapsed. Mayhem. Murder. Misery.

The day the last carton of ice cream was sold will never be forgotten.

Disclaimer: We shall never forget!

Writing In Suburbia #40: What I Did This Summer

This week I talk about what I did during the hiatus of this podcast. I explain how even though a writer never stops working, sometimes you can still recharge, relax, and let the world wash away. While still working. You know. Because the work never ends.

Also, apologies for the lame blues harp at the end. My lips just refused to work. It happens. Deal.

Comments Off on Writing In Suburbia #40: What I Did This Summer

Know what else I love? Dead Mech on sale for $.99! (Segue for the mofo win, yo!) If you haven’t read my zombies/mechs/zombies in mechs mash-up then go spend a dollar and get you some seriously fun post-apocalyptic goodness! Clicky linky here!

Oooh, wait, there’s more! And this novel is actually Halloween themed! Be sure and check out Intentional Haunting, my latest release. It’s Teen horror, so kinda a mix of John Green and Stephen King in that classic Jake Bible style y’all love so much! Clicky another linky here!

Now, how’s about we get on with the Halloween drabble?

“I SUMMON THEE, SATAN! SHOW ME YOUR DARK MAJESTY! GRACE US WITH YOUR EVIL PRESENCE!”

“Who dares summon me?” the Devil asked as he appeared in a puff of smoke in the center of the abandoned church.

“It is I, Master!” the man in the robes replied. “Your humble servant and-.”

“Sweet. Get me a latte from Starbucks, servant. Whole milk, two shots of vanilla. No cinnamon or nutmeg. NO CINNAMON OR NUTMEG!”

“God, I love Halloween,” the Devil sighed as the robed man hurried from the church and out to his Prius. “Free lattes rock.”

Disclaimer: If the Devil asks you to get him a latte, don’t get the two shots of vanilla. The guy is diabetic and in denial. Don’t be an enabler.

But, I don’t have much time because I gots to be writing/editing my middle grade scifi/horror series! Yes, folks, you heard that right, I’m writing for the kiddies!

I WILL WARP THE MINDS OF EVERY GENERATION!

I think your kids will dig the new series. It’s Goosebumps meets the Scooby Gang set in deep space! Huzzah!

“Does he mean the swamps?” I asked my companion.

“The swamps?” my companion replied.

“Well, yes, swamps. Are not moors a type of swamp?”

“BEWARE THE MOORS!” the old man cried again before pissing himself.

“Well, that’s unfortunate,” my companion said. “Shall we go?”

“But what about the moors? Are they swamps or not?”

“They can be made of wetlands, but are primarily grasslands like highland savannas.”

The ghostly apparitions rode towards us with their scimitars swinging in the foggy night.

Views From The Captain’s Chair! Episode Twenty-Eight: The Data Is A Lie! 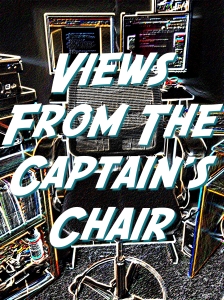 I know, I know, the Views are supposed to be on hiatus, but I just couldn’t let this one go. Read on, fearless warriors!

If you are a writer then you probably heard about Amazon sending out an email over the weekend. Yeah, it was a bit surreal, to say the least. A lot of propaganda and misdirection and all that other giant corporation stuff.

Chuck Wendig and Matt Wallace did a great job dissecting the email in their posts. You should go have a read. It was also covered by Time, Huffington Post, Wall Street Journal, and fifty trillion other online word pukers. (I include myself in the “word puker” category, so nobody get offended, alright? We’ve all had too much prose and ended up getting sick all over our stack of unread New Yorkers. No shame there.)

There is a lot of back and forth spittle and hissing between the Team Amazon authors and the Team Hachette authors. There is also a lot of stepping in the middle with T hands and a referee’s whistle telling everyone to chill and realize this has nothing to do with authors, but everything to do with mega corporations and profit.

But there is one thing I have yet to see anyone touch on that is really the absolute crux of this matter: Amazon’s ebook sales data.

Now, before you start pointing at the links to those blogposts, hear me out. I concede that several authors and reporters have mentioned that Amazon can easily be cherry picking their data and only showing what they want us all to see. I agree with that. Example (directly from Amazon’s email):

Good numbers, right? Maybe. Plenty of people have wondered how many ebooks sell at $10.99 or $11.99, but Amazon doesn’t release that info. Authors want the full numbers to analyze and that ain’t happening.

The problem is no one is realizing that the data they want means absolutely zero. You see, folks, the data Amazon releases to the public is rigged from the beginning. They could print their entire database and it makes no difference.

Why? Simple: Amazon controls what sells on Amazon.

Chew on that for a second.

Sure, people have free will and can buy whatever they want, but it has been proven time and time again that when Amazon markets something specifically that something sells like crazy. That means, if Amazon wants $9.99 ebooks to be the bestsellers then they can tweak their marketing, promotions, and search algorithms to make damn sure $9.99 ebooks sell more than other price points.

A farmer sells apples. He has tons and tons of different apples. The guy grows it all, yo, from Red Delicious to Arkansas Black. This farmer is your go-to apple guy, right? So you head to his farm and he has barrels and barrels of all the different apples for sale out front for $9.99 a pound. Seems a little spendy, but you’re all “Gotta have my apples!” and you buy a couple pounds of this and a couple pounds of that then head on home for the apple enjoyment portion of life.

Now, are you the farmer’s only customer? Heck to the no! Lots of people dig this farmer’s apples so they go to his farm and see the barrels and barrels of $9.99 apples. Some people see that there are other barrels of apples tucked away in the barn behind the farmer, but only a couple of folks go check those out. Why bother hunting for other apples when you can get the yummy ones in front of you for $9.99? So, folks be buying some $9.99 apples and when the local news station comes by to do a happy, feel-good piece, they ask the farmer which apples sell the best.

See where I’m going with this? There were other apples tucked away for different prices. I’m not saying those apples were better quality or worse quality, or even different apples, but they were shoved out of sight and out of mind by the farmer so all his customers saw were the $9.99 a pound barrels.

That’s what Amazon can do; they can make sure you, and everyone else, buy ebooks at the price point they want. And that is what makes their data worthless when proving anything regarding readers’ buying habits. You want to know what price readers want? Then get sales data from ALL the ebook retailers and compile that. Then you’ll have some true data and something to talk about.

Until then, all anyone is doing is pointing at the news clip of that farmer saying “Folks like the ones right here for $9.99 the most” and calling it cherry picking when the truth is there isn’t even a cherry in the bunch.

I’ll let y’all ponder that for a while. Good luck.

He is the author of the bestselling Z-Burbia series for Severed Press as well as the Apex Trilogy (DEAD MECH, The Americans, Metal and Ash), Mega,AntiBio, and the YA zombie novel Little Dead Man, as well as the forthcoming (October) Teen horror novel Intentional Haunting (both by Permuted Press).

Posted in Views From The Captain's Chair!

Comments Off on Views From The Captain’s Chair! Episode Twenty-Eight: The Data Is A Lie!