I am pleased to announce: Galactic Vice! 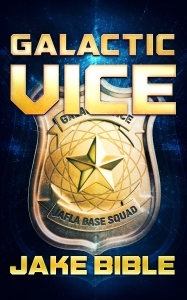 Politicians on the take. Underground gambling. Sex trafficking.
Another day at the office for Galactic Vice Lieutenant Angie McDade.

A cargo barge filled with corpses. A potential war between crime syndicates. Traitors within the Galactic Vice.
These are the nightmares the three must face. Using all of their resources and experience they will fight to keep each other alive even it means bending rules, busting heads, and breaking laws.

But tossing regulations to the side and going rogue may not save them from an investigation that has doom and downfall written all over it.

Can they solve the case before it becomes their last? Or will the operation fail and end up ripping their lives and Jafla Base apart…

Well, it looks like we got some giant sharks on our hands, people!

I am happy to announce the release of my latest novel, Mega 2: Baja Blood!

Team Grendel is back and this time they have double the monster sharks and double the trouble as a drug cartel and the Mexican Navy are both ready to blow the Beowulf III out of the water!

When a top secret, undercover mission goes wrong for one of the company’s operatives, Ballantine must call on Team Grendel and the crew of the Beowulf III to take down a drug lord and stop Southern California from being overrun by a new substance more addictive and deadly than any drug on the planet.

But things are never that simple as Team Grendel find they are under siege by cloned Megalodon sharks that developed a taste for the new substance, sending the monsters on a drug fueled rampage of bloody violence along the Baja Mexico coastline!
Blood is in the water and the feeding frenzy is on!

What’s that? You haven’t read the first one? Well, you better get on it! Oh, you don’t have time to read right now, you say? Well, I’m sure you have time to listen!

Mega is now available as an audiobook from you favorite audiobook retailer!

And Team Grendel must find it, fight it, and kill it.

Kinsey Thorne, the first female US Navy SEAL candidate has hit rock bottom. Having washed out of the Navy, she turned to every drink and drug she could get her hands on. Until her father and cousins, all ex-Navy SEALS themselves, offer her a way back into the life: as part of a private, elite combat Team being put together to find and hunt down an impossible monster in the Indian Ocean. Kinsey has a second chance, but can she live through it?

Lots of bloody shark action for your eyeholes and earholes! Enjoy!

Comments Off on New Releases!