On the Earth Colony Asteroid Scorpio, something has gone terribly wrong. Millions of light years off course and 900 years late, the ship’s AIs wake up only seven kids, leaving the adults stuck in cryosleep! Damaged from the long journey, the AIs must repair the awakened seven with the only thing available–cybernetic robot parts.

Along with learning to function with new cyber parts, the all-kid crew must unravel the mystery of what went wrong with the Scorpio. As if the nightmare of deep space isn’t enough, the kids soon find themselves battling the ship’s maintenance robots while their cyber parts begin taking on a life of their own!

After escaping the dangers of the rogue loader bots and fighting for control of their own cybernetic enhancements, the kid crew finds itself in an even bigger mess. The ship’s systems seem determined to destroy them. If they cannot regain control, the crew faces the possibility of being burned, drowned, or ejected into deep space!

Luckily the kids have an ally, an AI named Ship, willing to help them dodge the forest fires, survive the floods, and escape the space vacuum, all while they search to unravel the mystery of what is happening to the Scorpio!

The kids of the Scorpio have faced many challenges including hostile robots, malfunctioning cyber body parts and escapes from fires, floods, and deep space. Now an even worse nightmare awaits them. Filled with disbelief, the crew finds itself facing an all-too-familiar evil–creatures they’ve seen only in long-ago movies. It isn’t long before they are running for their lives to protect the one thing these creatures want more than anything…BRAINS!

With no time to rest after surviving a zombie horde, the Scorpio crew is thrust into another night-mare adventure. This time the threat is seemingly living shadows terrorizing the ship and crew. The shadows appear like animals and move like smoke, except for one called The Big Shadow, who is solid–and deadly.

Fighting a solo battle, Security Chief Landon Fields sends his friends to safety, while he alone attempts to outwit the Big Shadow. He knows he must stay alive long enough to solve the mystery found in the Scorpio science labs!

The kid crew of Scorpio is familiar with facing challenges, having repeatedly outmaneuvered tests thrown at them by the ships’ AIs. This time, however, they may have met their match.

With relentless taunting an AI named Tutor pushes the crew to new limits with one deadly exam after another. In this high stakes game, the kids quickly learn that their performance means more than a grade–it means survival! 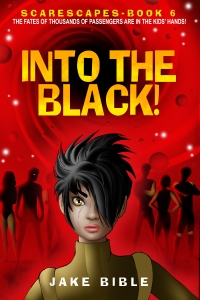 ScareScapes Book Six: Into The Black!-

Having survived each horror placed before them, the all-kid crew of the Scorpio find themselves confronted with one final test. With the help of a new crew member, the kids must gain control of the Scorpio’s navigation system before it’s too late.