Another Friday! Another Drabble! Another Party!

And there’s a night in there somewhere too.

This week I will go straight to the drabble. Right after this message from our sponsor! 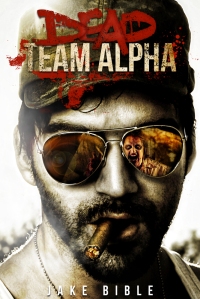 Do you like zombies? How about guns and guts and lots of swearing? Are you sure, because when I say lots of swearing I’m talking about the f-bomb being dropped 455 times in one novel? Can you handle it? CAN YOU?

Of course you can, which is why you are going to read Dead Team Alpha! Look at the cover! That’s some awesome waiting to jam into your eyeholes and make sweet, sweet love to your grey matter!

Dead Team Alpha: If the zombies don’t get you then the intense amount of cursing will!

Now to the drabble!

“Four, five, six,” the man says, slapping the bills into my palm.

“The deal was for 1200,” I frown, knowing the missing cash will come out of my ass if I walk into Scotty’s with only this.

“The deal was for pure ash,” the man says, grabbing up a bag of grey powder from the table. “This ain’t pure.”

He cuts into the bag with a knife and snorts a small pile directly from the blade.