It is here! Mega 4: Behemoth Island has arrived and is ready to chomp your head off and swallow it without chewing!

So click that pic and return to the insane world of Team Grendel! All of your favorite characters are back! Kinsey, Darren, Thorne, Darby, Ballantine, Lucy, the Reynolds Brothers (they never shut up!), Mike, Gunnar- sheesh, how many awesome characters are there? NOT ENOUGH! 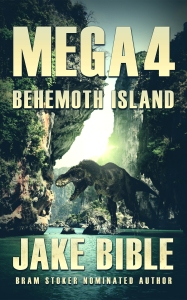 Running from the world, their ship crippled, their supplies dangerously low, Team Grendel follow Ballantine’s lead to a promised paradise. A place where they can hide and regroup, rest and plan the next step in their lives.

If only life were so simple.

Within hours of arriving at their idyllic island, Team Grendel and the crew of the Beowulf III quickly realize that once again they have been thrust into a nightmare of gigantic proportions. One might say it is a behemoth of a bad dream!

Giant dinosaurs! Man-eating plants! Cannibal cavemen with a hunger for fresh meat! Behemoth Island puts Team Grendel in the middle of Hell and doesn’t let up until the beaches are covered in blood and the jungles are burning!