The 3rd Roak book is out now!

Get to the buying, the reading, and the reviewing! Tell your friends! Spread the word! 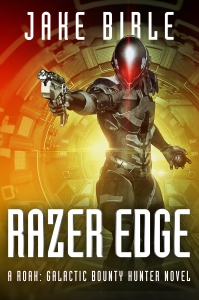 Razer Station is one of the most notorious stations in the galaxy. Criminals, con artists, freaks, rebels, junkies, and smugglers inhabit the space station that floats at the outer edge of civilization.
It’s Roak’s kind of place.
But, Roak isn’t on Razer for a little R&R; he’s there on a job.
For Roak, it should be an easy job- track down an old tech that has been targeted by several corporations and deliver the tech to the corporations.
Except Razer Station is never that accommodating and Roak’s easy job quickly turns into a nightmare battle for survival and a race across the station before it all goes up in flames.
The third chapter in the Roak saga continues with more grit, more grime, and more bodies than ever. Roak is pissed and gunning for anyone and everyone that dares get in his way!

It is time for the Stone Cold Bastards cover reveal!

This is my first novel with Bell Bridge Books, so fingers crossed it goes well. CROSS THOSE FINGERS!

But, hey, you can do more than just cross your fingers. You can pre-order the novel now! Release date is February 24th, but if you want to be one of the cool kids then you should get to pre-ordering!

Also, Bell Bridge Books does some great marketing. There will be all kinds of cool things coming to promote Stone Cold Bastards. If you want to be in the know then sign up for my mailing list. Everybody on the list got to see this cover before y’all. THEY ARE THE CHOSEN ONES! Also, I never spam. Ever. So there’s that.

Anyhoo, hope you dig the cover and get to the clickety-clickety so you can pre-order.

Writing In Suburbia #47: Time Is Money And I Ain’t Got Enough Of Either

Time for one more episode in November! I squeaked it in!

Speaking of time, this episode is all about how I structure and schedule what I will be writing over the next few months. I go into detail on how I pick my projects and how I recover when the best laid plans get off track. This is a good one for those of you that struggle with budgeting your time.

Comments Off on Writing In Suburbia #47: Time Is Money And I Ain’t Got Enough Of Either

That’s right, folks! As stated in my ever so vague title, I have signed a 3 book deal with Bell Bridge Books, an imprint of BelleBooks!

Bell Bridge/BelleBooks is a small publisher that has been putting out consistently great work for the past sixteen years. That’s a nice track record for a small publisher which is why I considered signing with them. As a dozen new small presses enter the marketplace each year, finding one that has actual longevity and sales is a plus.

It’s actually an idea I have been playing with for some time. Here’s the pitch I proposed that got me the gig:

“Stone Cold Bastards–
Genre: urban fantasy/action adventure
Imagine the Dirty Dozen as a team of gargoyles that must defend their Sanctuary against a raving horde of demon-possessed humans that want nothing more than the destruction of the entire human race and all that is good. Imagine that.
Stone Cold Bastards is set in a world where Hell has released its demons, leaving most of humanity a puke-spewing, blue-skinned, head-spinning mess. Humanity’s last hope? A team of misfit gargoyles, come alive and ready for battle during the End of Days. Unfortunately the gargoyles could care less if humanity is wiped out. The only thing they will fight for is their Sanctuary that they had perched on for centuries as stone carvings. Luckily for some survivors that have found the Sanctuary, the gargoyles’ protection extends to everyone that can make it inside the walls and away from the demon hordes.
But when a wandering gargoyle and a small child, who apparently holds the last hope for humanity, show up at the Sanctuary, things get tricky. Will they be given protection or left out in the Hell that Earth has become?
Stone Cold Bastards offers rip roaring action, over the top violence, and pulpy good fun of the Lee Marvin kind in an urban fantasy setting.”

How’s that work for ya? As soon as I have a publication date, I’ll let you know!

As for the other two novels, they’ll be urban fantasy also since that is a genre that Bell Bridge has found quite a lot of success with. Announcements for those will be soon.

Why’d I sign with another publisher when I already work with Severed Press and Permuted Press? Good question. In fact, it’s a question that I’ll be answering on the latest episode of Writing In Suburbia. If you want more in-depth details then I suggest you subscribe to the podcast so you don’t miss the episode when it drops later today (subscription info below). Cool? Cool!

That’s it! Looking forward to working with Bell Bridge Books and all the great people there!

Comments Off on Announcement: Signed a 3 Book Deal With Bell Bridge Books!

That’s right, my fine feathered people (you are feathered, get used to it), there is a new Jake Bible novel that has been released into the wild.

The wild, wild OCEAN, that is!

May I present: Blood Cruise!

Look at that cover. LOOK AT IT! How can you not want to buy this book? 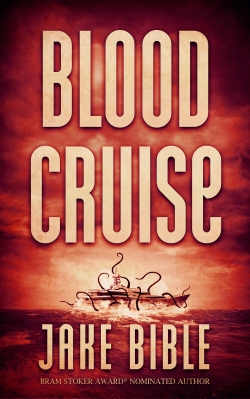 Ben Clow’s plans are set. Drop off kids, pick up girlfriend, head to the marina, and hop on best friend’s cruiser for a weekend of fun at sea. But Ben’s happy plans are about to be changed by a tentacled horror that lurks beneath the waves.

International crime lords! Deep cover black ops agents! A ravenous, bloodsucking monster! A storm of evil and danger conspire to turn Ben Clow’s vacation from a fun ocean getaway into a nightmare of a Blood Cruise!

International crime lords? Deep cover black ops agents? A ravenous, bloodsucking monster? And more! MORE! THIS BOOK HAS IT ALL! ALL THE FUN! SO MUCH FUN AND BLOOD AND ACTION AND BLOOD AND POKER AND BLOOD AND GUNS AND BLOOD!

So get to the clickety-clickety on that fine, fine cover and prepare to be transported on a…wait for it…BLOOD CRUISE!