Welcome back! Come in, come in. Make yourselves comfortable while I inflict upon you another Halloween themed Drabble!

But, before I do, I want to weigh in on the Permuted Press hijinks going on: don’t believe the rumors and BS being spread. Just don’t. I’ll have a full blog post addressing this issue on Monday, so stay tuned.

Now, on to tonight’s drabble!

“The pumpkins screamed, man!” Horace shouted as he backed away from the front porch. “The damn things screamed when I tried to pick them up!”

“Dude, that’s the sound effects from across the street,” Bart frowned.

“You kids! Get away from my pumpkins!” the old woman screeched as she pushed open the screen door. “Go!”

“Help us!” three of the carved pumpkins screamed. “Help us!”

“Unless you want to join them,” the old woman sneered at the teenagers. “Then please stay.”

“Told ya!” Horace cried as they turned and ran.

Disclaimer: Quit while you’re ahead, kids. Sometimes being too old to trick or treat is a good thing.

And speaking of Halloween, I have a reading/signing at Malaprop’s Bookstore the night before Halloween!  Here’s the flyer! 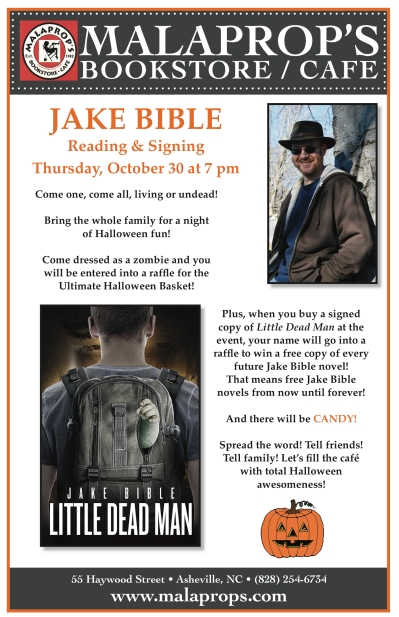 If you are in town that night then you should swing on by so you can have a chance to win FREE JAKE BIBLE NOVELS FOR LIFE! Just click on the poster and RSVP at the event page on Facebook. RSVPing helps me and helps Malaprop’s know how many people will be there.

The room was filled with wood shavings as Biggs frantically carved stake after stake. There was no time to slow down, his only chance at survival was to be prepared for the worst.

A knock at the door puzzled him; they had never been so forward before. He stood, reached out, turned the knob, and yanked the door open while he held a stake above his head, ready.

“DIE, EVIL!” Biggs bellowed as the children ran screaming. “What the…?”

He looked at his phone and saw 31 on the screen.

Disclaimer: You’ll poke your eye out!

Sorry, but no drabble tonight.

I know, I know, I’m sorry. It’s been a hectic week and I’m getting ready for the Asheville Comic Expo tomorrow. If you are in the Asheville area and want to buy some signed copies of my novels then you should swing on by! I’ll also be on an author’s panel from 3pm-3:45pm.

Also, if you are in the area on October 30th then plan on coming by Malaprop’s Bookstore and Cafe for my reading/signing of my YA zombie novel, Little Dead Man! There will be candy and contests! You’ll even have a chance to win free Jake Bible novels for the rest of your life! THE REST OF YOUR LIFE! Feel free to join the event on Facebook!

So, please have an excellent Friday night and tune in next week for an actual drabble. I promise!

Comments Off on Friday Night Announcements!

FREE DRABBLES FOR ALL!

That’s my philosophy. I know I missed last week, but that’s because I actually went on vacation over Labor Day weekend. Crazy, right? I got to check out Georgetown, SC. Talk about a hidden bit of American history. I had no clue how prominent that place was during the 19th and early 20th centuries.

Know what else is prominent? CANNIBALS! Okay, okay, it’s a shitty segue, but what are ya gonna do?

Z-Burbia 4: Cannibal Road is available as an ebook (with print coming soon)! Z4 keeps the story of the Stanfords, and all of those from Whispering Pines, rolling on down the road. If you liked the last three Z-Burbia’s then you will love this one! And check out the cover! That’s a sweet cover! 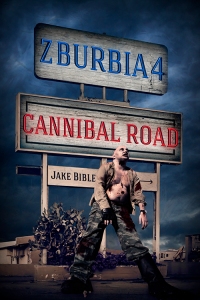 Alright, alright, I’ll get to the drabble! Sheesh!

But first here’s a link to Mega 2: Baja Blood in audiobook form! ZING!

Everything In Its Place

There are fewer things in life more frustrating than not having the right size container when you need it. You spend a lifetime collecting jugs and boxes, trunks and barrels, jars and crates.

Then you look and it’s not there. It should be, a coffin is hard to misplace. It’s not like it’s an old mint tin or empty vial. It’s a bloody freakin’ coffin!

So, you dig. You know where an extra is. It may have had contents in it at one time, but surely Nature has claimed them by now. Two more shovelfuls and you’ll know for sure.

Disclaimer: You can never have enough extra containers, people.

Friday Night Drabble Party is in the house! Or apartment! Or trailer! Or yurt!

Have ya missed it? I know ya have!

Now, I know you don’t want to hear me prattle on, so I’ll just get right into the free micro-fiction.

But…let me ask a favor. If you dig the Party, and you like micro-fiction that is FREE then please share the link to this post. Tweet it, Facebook it, whatever- share it. If I’m going to give these words away for free then I want as many people as possible to share in the madness that is Jake Bible Fiction.

Passing The Time
By
Jake Bible

“What are you doing?” Mintly asked.

“Just saying the word ‘carabiner’ over and over,” Bolton replied.

“Because the word is different.You know how when you say a word over and over it loses its meaning?”

“Carabiner doesn’t. Try it. I can say the word a hundred times and it still makes sense.”

Mintly stared at Bolton for a while then looked down at the massive pool of sharks below their cage.

Disclaimer: Everything changes, but it always stays the same.